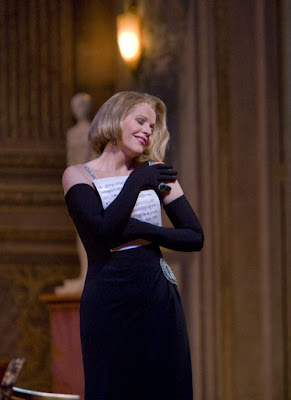 When Renée Fleming had her tour de force Met opening night gala of 2008, there could no longer be a doubt as to her standing as our great American opera diva. She is the first woman and only the second singer in Met history to headline an opening night. For the unprecedented evening she sang selections from La Traviata, Manon, and the final scene from Capriccio. Critics seemed to think that the later was her best, and everybody hoped for more to come. Last night our dream came true when Ms. Fleming sang in the full length opera. From start to finish, she seemed to feel right at home in this luxuriously decadent, serene, and musically sensitive work. It is obvious that she loves singing Strauss; not only does her voice so effortlessly melt into the orchestral texture, but she rolls around in it, blooming every chance she gets. One would be hard pressed to find a better match for the fabulous Countess than this diva.
The kind of respect and excitement Ms. Fleming generates with whatever project she takes on demands sincere admiration and respect. She is as mainstream a star as opera singers can become, for which the closeted opera world should be eternally grateful. Naturally, I get excited when she comes to the Met. Unfortunately, she has yet to rock my socks off. Last month, she employed the same vocal style she does in Strauss to Armida, which ended up making Rossini sound a little bit too luscious with not enough bite. For such a technically precise, direct, and light style as bel-canto, her velvety and buttery voice just sounded awkward.
Some people complain that Ms. Fleming's voice often remains at a distanced, static emotion; that it lacks a certain intensity of direction on a literal communication level. Take as a contrast Maria Callas, whos emotional sharpness still seems to rip at ones heart today, even through a pair of headphones. Most of the times I've seen Ms. Fleming, I end up pulling at strings, trying to fall in love. But obviously, falling in love cannot be forced. Capriccio and late Strauss in general are such a beautiful fit for her because directional clarity is not as urgent. There is a lot more bathing in ones own sound, which she does oh so well. For me, the sustained pleasure she produces is rather like taking a slow bite from a chocolate moose cake. You don't necessarily feel rejuvenated afterwards, but the instant gratification makes the experience worth it...maybe. My date for the evening seemed completely uninspired. There was a certain drama missing from his usual night at the opera.
Capriccio was Strauss's last opera. It premiered in Munich in 1942, at the height of World War II. The plot centers around the age-old debate about which is more important- words or music, (Prima la musica, Poi le Parole). This idea for an opera had originated between Strauss and his librettist at the time, Stefan Zweig. After the death of Strauss's longtime collaborator, Hugo con Hofmannsthal, in 1929, Strauss managed to find an equally vibrant partnership with Zweig. Their original plan was to present Capriccio first, posing the eternal question, and then to follow it with their "answer"- the mythological subject of Daphne. Because Zweig was Jewish, their close association was eventually forced to take on an intermediary, the aryan theatre historian Joseph Gregor. Where Zweig was a creative artist, Gregor was an academic, and Strauss became consistently frustrated with his new partner. Fortunately, Strauss had already been discussing the opera with a friend, the conductor Clemens Krauss. Krauss took over the half completed project, but evidently a fair share of the final libretto is by Strauss himself.
The original idea of pairing Capriccio with Daphne was now thought to comprise too long of an evening, so Strauss came up with a better idea. Halfway through Capriccio the audience learns that what they have been listening to all along is in fact the "answer" to this eternal debate between words and music: Capriccio itself, is the balanced work of the composer, Flamand, and the poet, Olivier. Strauss then uses these two paradoxical characters as the main love bait for the Countess. In the final eloquent scene, these are the two sides that she is debating, portrayed literally as which person she should fall in love with, and figuratively with obviously much broader implications. It is a conundrum that Strauss so beautifully presents as his final oeuvre.
(The picture above is from the 2008 Capriccio. I like the dress better than her new one.)
Posted by DGV at 10:18 AM