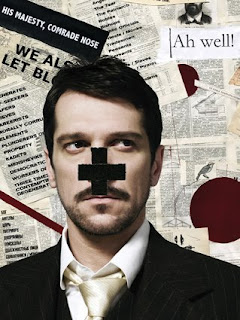 Shostakovich’s The Nose, directed by the currently ‘hot’ artist William Kentridge, has been playing at the Met to sold-out houses for the past three weeks. Standing room has sold out shortly after 10am. Both times I saw it I barely got tickets, which is rare given that prior to this I have never had problems purchasing tickets at 2 in the afternoon. If there is proof towards the longevity of opera as an art form, this is it. For once the sold-out production is not a Verdi or Puccini opera, but an absurd atonal one.

There is much about the music of The Nose that can still be called avant-garde today. Its montage construction, largely atonal fragments, an absurd eight-voiced canon, the bold experiments of a 10 person percussion section, and its satirical and paradoxical references to Russian ‘greats’ such as Tchaikovsky, Mussorgsky, and Rimsky-Korsakov, are enough reasons to turn the head of any regular opera lover. But as Alex Ross points out, these stock devices of the Western avant-garde would probably not have stood out had the composer lived in Berlin in the 1920s, among the “general throng of spiky young composers.” According to the Shostakovich biographer Solomon Volkov, what makes this opera dramatically pleasing is that the central character elicits our compassion. Kovalyov’s emotionally charged music about missing and searching for his nose is enough to affect audiences. In this production it is the absurd plot that has been highlighted.

Through projections and artificial visual interplay with live characters, Mr. Kentridge has made the production as wonderful as the music. His work in this opera does not make literal sense- he is not visually representing what is going on in the plot. After all, there is no need to spoon-feed an audience. It is purity in art that he says is dangerous and leads to misunderstanding. Instead, his work focuses on ambiguity, unclearness, and surprising contradictions that keep life unpredictable and interesting. He calls it “productive misunderstanding.” Knowledge comes from people’s surroundings, from their own personal experiences. No one really knows what is at the center of truth.

It is the beauty of imagination that forms the basis of this production. During a scene in the opera when Kovalyov is helplessly trying to reattach his nose, a tragic bassoon melody is accompanied by archival footage of the ballerina Anna Pavlova, with a nose as her head. It does not literally make sense, but it moves the audience nonetheless. The first quirky instrumental interlude in the opera is accompanied by projected figures made out of inanimate objects like scissors and flags, marching across stage. During one attempt by Kovalyov to re-attach his nose, a silhouette projection shows a nose attempting to climb a ladder, repeatedly and helplessly falling down. It is both funny and absurd in combination with the satirical music.

Fresh from his Tony Award winning run next door in South Pacific, the baritone Paulo Szot sang passionately and acted with immense drama and humor, when needed. The rest of the approximately fifty-member cast delivered their solos with conviction. Standing out were the sopranos Claudia Waite and Erin Morley. The former has a huge Wagnerian voice that she employed comically as the barber’s wife during Act 1. During the Cathedral scene at the end of Act 1, Ms. Morley sang beautifully and floated her melodic line above the orchestra accompaniment.

Producing The Nose was evidently the idea of Mr. Kentridge, who was originally approached back in 2005 by the newly appointed Met general manager, Peter Gelb, about directing a production of Attila. Mr. Gelb subsequently got Valery Gergiev, the leading Shostakovich conductor, to take it on. During both performances I saw, Mr. Gergiev was a solid rock and seemed to have worked seamlessly to allow Mr. Kentridge his artistic freedom. I’m sure I’m not the only one who is glad that Mr. Gelb agreed to The Nose. Shotakovich’s beautiful yet largely unknown opera is a perfect match to the work aesthetics of Mr. Kentridge. Bravo.

Check out the interview with William Kentridge at the New York City Public Library...

Traditional production pleases, but does not overwhelm.

The Franco Zeffirelli recipe for a successful evening of opera includes the following:

All three of these ingredients were evident last night during the Met’s 1,215th performance of La Bohème, at least a few hundred of which have been of this Zeffirelli production, dating from 1981. I do not mean to say it was not an enjoyable evening, but after looking at the sets for a couple minutes I found more pleasure in closing my eyes and listening. As opulent as the stage was, what was confusing was where to direct my focus. In the Act II street scene with over a hundred people on stage, attention drifted much too often away from the music and to a “Where’s Waldo?” search for the soloists. The Act III snow set was pretty and simple, suiting the music nicely, but was also very darkly lit, covering up the individual performances. Acts I and IV were set in a garret, successfully representing the little space and possessions of a bohemian life, and placed in front of a hazy backdrop of industrial Paris. These two Acts were the most palatable- I felt capable of digesting the visual without loosing concentration on the music. Even though La Bohème is detail specific in terms of its settings, audiences would be refreshed by a minimalist production of this opera. Stripping the template away is a good idea every once in a while.

When they sang at their best, the soprano Anna Netrebko and the tenor Piotr Beczala were ravishing and full of emotion. Mr. Beczala’s passionate singing of the Act I aria “Che gelida mania” prompted loud ‘bravos!’ from the audience, and Ms. Netrebko’s dark and silky toned rendition of “Mi chiamano Mimi” stood out for its sensual rubato and elongated phrases. The off-stage finale of Act I (“O soave fanciulla”) was just as beautiful as any legendary recording out there. Ruth Ann Swenson was a little horse in her top register, but nonetheless she sang with conviction.

This powerhouse singing, unfortunately, was not consistent. There was no drastic drop in quality, but the soloists often took too much liberty with time, becoming too detached from the orchestra. Mr. Beczala did not sing with the same volume or fierceness during the last act as he did in the first, and Ms. Netrebko was sometimes in her own little world. The conductor, Marco Armiliato led a nuanced performance, although I thought the opera’s finale could have used more ferocity and dynamics.

At the end I left very relaxed and happy. Besides total conviction, which makes me go back to the Thomas Beecham recording time and time again, the musicianship tonight was strong. What I missed, and what has made newer productions this season turn out a success, was the director/conductor collaboration. If Maestro Armiliato and Mr. Zeffirelli had created a production together, there would have been many more magical moments on stage and in the music. Instead, the Met keeps using the same antiquated 30-year-old production. In the end, the evening was run-of-the-mill.

I just saw The Nose by Shostakovich, directed by William Kentridge at the Met. My view of the dramatic effect of opera is now completely convoluted. I'ma need a few days with this one, and it wouldn't hurt seeing it again...
Posted by DGV at 7:24 PM No comments:

I had high hopes for this production of Attila, probably unrealistically high. With the involvement of celebrity level artists such as Miuccia Prada and Herzog & de Meuron, the expectations for a unique night of opera were high. Not that they severely disappointed, but the only remarkable aspect of the production was the music, conducted by Riccardo Muti.

The vision taken by the director, Pierre Audi, was to tell the story of Attila through a poetic, almost Grecian setting. The breathtaking opening set of a crumbled cement structure was beautifully touching, not only a monument to the devastation possible by man, but striking extra significance given the day’s earthquake that had just struck Chile. Below the cement structure chorus members were lying, scattered about, as if crushed in defeat by Attila’s army. Above stood the title character, as if proclaiming his superiority over the world. It was slightly overwhelming.

Unfortunately, the rest of the set design was stilted, and Ms. Prada’s iconic fashion personality was largely invisible next to the domineering sets. Mr. Audi chose to have the singers perform, while mostly standing still, amidst a large wall of shrubbery. The result was pretty, but if it were not for the music, I would have fallen asleep.

Riccardo Muti conducted a stylistically unique and organic performance, turning the orchestra into a living organism. Each note seemed to have a different accent to it, given the direction of the phrase, a direction that was always evident. Maestro Muti is a known champion of Verdi, and the orchestra played much more definitively than they have in any other Verdi opera this season. For the later part of the opera, I enjoyed myself much more when I closed my eyes. Mr. Audi’s gargantuan production distracted me from the brilliance coming out of the pit.

All the singers sang beautifully. Ildar Abdrazakov sang with a dark and forceful tone. Violeta Urmana let her huge voice roar, her shimmering sound reminded me of Leontyne Price. The tenor, Ramón Vargas, let all the stops out and directed his sound towards the last seats in the family circle. Musically, this evening was magnificent. Not to demote Mr. Audi’s artistic merit, but the production was just not nearly as exciting.